“Go to the middle of the bridge and turn left.” According to a local legend, these are the directions a Zanesville man gave a confused traveler more than 100 years ago. Since then, the phrase has remained a popular joke with Zanesville residents. Since the early 1800s, the Y Bridge has received worldwide attention. Ripley’s Believe It or Not featured Zanesville’s Y Bridge as “the only bridge in the world which you can cross and still be on the same side of the river.” The bridge grabbed the attention of airplane pilots as well. In the days when pilots relied on landmarks for their bearings, Amelia Earhart called Zanesville “the most recognizable city in the country” because of the Y Bridge. In 1995, a Japanese film crew taped the Y Bridge for “Bridges of the World” a television show with an audience of 20 million viewers. The development of the Y Bridge began in 1812, when the Ohio General Assembly granted a charter for the construction of a bridge to connect Zanesville with Putnam, Natchez and West Zanesville. These three towns would later become part of Zanesville. The first Y Bridge opened to traffic in 1814. The center pier was made of limestone, while the others were made of wood. The bridge was uncovered and all travelers had to pay a toll charge to cross, except churchgoers and people in funeral and military processions. The first bridge required constant repairs due to its frail construction, and in 1818 was carried off by a heavy flood. Construction began immediately, and the second Y Bridge opened in 1819. Like the first bridge, it was a wooden, uncovered toll bridge. This structure was declared unsafe after only 12 years due to heavy traffic from new roads leading to Zanesville. It became apparent that a more solid structure was necessary. The third Y Bridge, a covered wooden structure, lasted 68 years. Catherinus Buckingham designed it. His father, Ebenezer, supervised the building. During construction, a flood threatened the bridge supports. Ebenezer gave orders to remove the wedges that held these supports so that floodwaters would wash away the supports without taking the bridge. However, when the wedges were removed, the span fell into the river and Ebenezer Buckingham was killed. Catherinus took over the supervision and the bridge was completed in 1832. In 1868, the county commissioners bought the bridge and abolished the toll charge. For the first time, the Y Bridge was a toll free structure. This played a key role in the unification of Zanesville with Putnam, Natchez and West Zanesville. Rumors that the Y Bridge was unsafe began circulating and in 1900, the community voted to tear down the bridge and rebuild. The fourth Y Bridge opened to traffic in 1902. This bridge was uncovered and made of reinforced concrete. It would last for 81 years. The first signs of trouble on the fourth bridge were spotted by highway engineers in the 1940s but were ignored by local residents for another 30 years. On May 6, 1983, the main span was demolished and construction began on the fifth Y Bridge. It was complete in the Fall of 1984 and still stands today. It is made of steel and concrete and was designed to look like the bridge of 1902. Today, Zanesville residents rely on the Y Bridge for everyday transportation. It has had a positive impact on commerce in the area and has made traveling to other parts of Zanesville convenient. Its usefulness has stood the test of time. This historic bridge is also a source of pride for local residents. Residents of the Y Bridge City will certainly take pride in their bridge for centuries to come. Tourists can see the Y Bridge from the Putnam Park Overlook. This park offers the best view of Zanesville. To get to the Putnam Overlook – cross the Y Bridge (from downtown Zanesville heading West) and turn left on the middle. Turn left onto Pine Street and drive to the second street on your left, which is Grandview Avenue. Turn left and follow the signs to the Overlook. 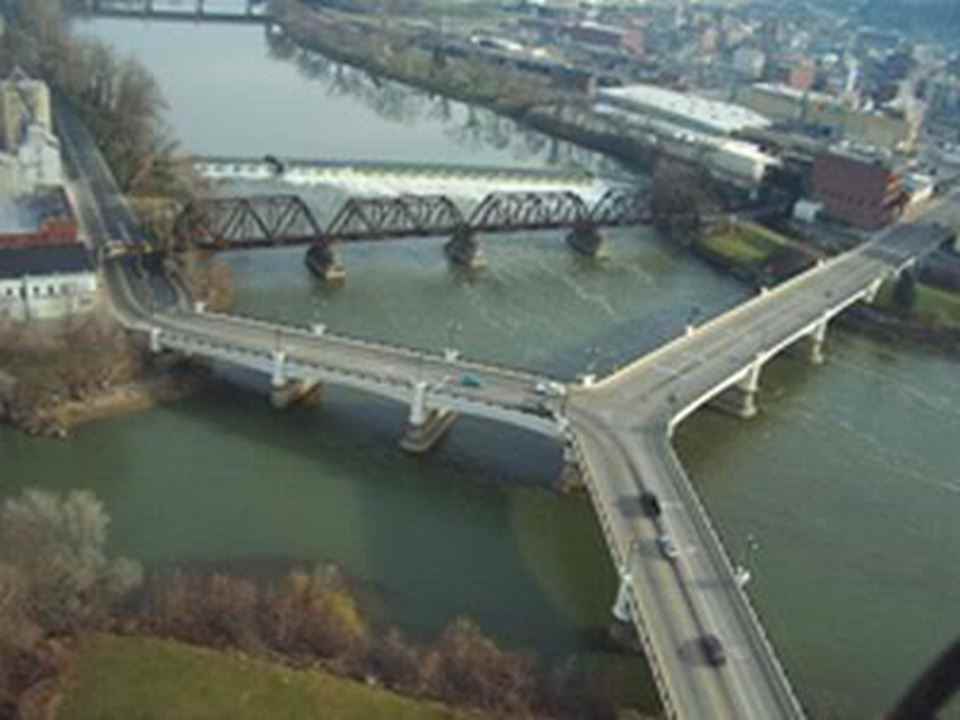